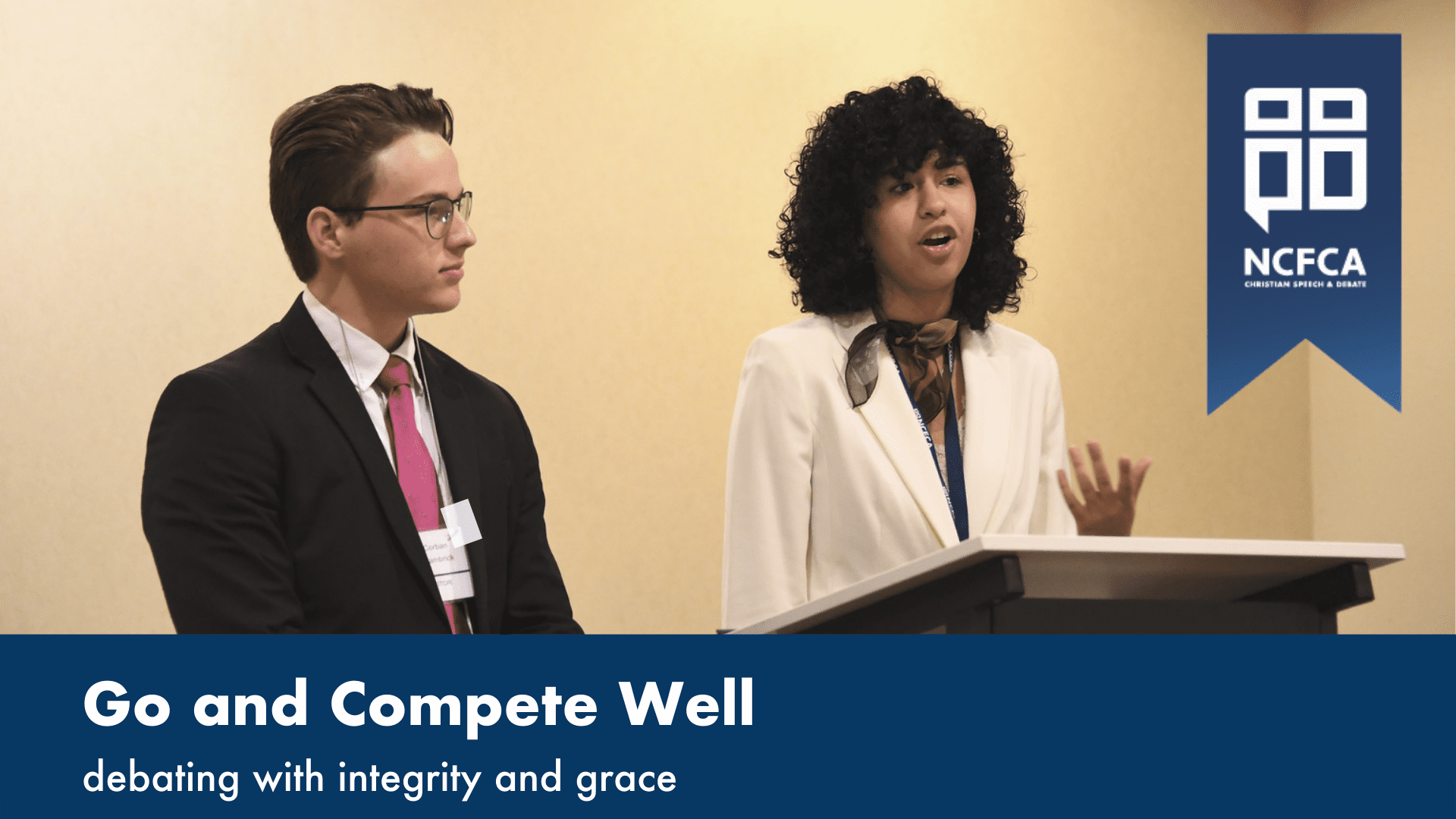 More than a decade ago, when I first began serving as a Tournament Director, I closed all of my daily announcements with the admonition to “Go and compete well.” Now, here we are in 2022, and I’ll be real enough to confess that when I started using those words, I hadn’t spent much time thinking about what they really meant. Of course, I always wanted our students to do a good job in competition and to treat one another with respect, but I hadn’t fully considered the specifics of how they would “compete well” when rubber met the road in speech and debate rounds.

More recently, I’ve considered how this principle applies to some of our seemingly ambiguous  protocols and rules, and I thought it would be worthwhile to discuss three excellent questions the Debate Committee has received this season which boil down to grappling with how to compete well.

Let’s start with the hottest Debate Committee question for this season.

Why the limit on asking judge(s) questions before the round?

Coaches, parents, and students from past seasons noticed a new addition to the Debate Rules this season:

“Only the Affirmative speaker for Lincoln-Douglas Value or 1st Affirmative speaker for Team Policy may briefly ask a general question about judging background or philosophy prior to beginning the AC/1AC. Asking specific questions about debate theory, asking multiple questions, or engaging in conversation with the judge about the debate round is not permitted.”

A number of people have asked for the reasoning behind this change. The answer is twofold.

First and foremost, the answer is grounded in our NCFCA Judge Philosophy. We actively seek people from all walks of life to serve as judges for our events because we want to equip students to communicate truth with integrity and grace— not only in competition—but more importantly, in real life. Many of the circumstances that we face in life require us to communicate important truths without an opportunity to quiz our audience about their professional background, familiarity with a topic, or how they evaluate matters of policy and values. Effective communicators cover topics with a clarity and precision that beginners understand and experts respect. The skill of communicating winsomely and convincingly—even with some uncertainty about the audience—is at the core of what we are trying to instill. Therefore, we’re okay with competitors knowing a bit less about each judge than they might like to know.

The second and more practical reason for making this change is to address an observed trend toward more extensive questioning of judges. This questioning takes valuable time at the beginning of the round, is often unbalanced between teams, and occasionally makes judges feel grilled.

While we can appreciate our debaters’ aspirations to tailor arguments to their judges, the reality is that customizing arguments is often elusive, even with additional background information that might be obtained through extra questions. And, by design, it should be nearly impossible for teams who face panels of judges in elimination rounds to tailor arguments to suit the entire panel.

With all of that said, you may be wondering why we still allow “a general question about judging background or philosophy.” The answer is that we understand that it can be valuable for judges to have an opportunity to communicate about their level of experience and comfort with judging, and we support debaters in their desire to respond appropriately to a judge’s stated level of experience and confidence.

In summary, we encourage debaters to think through how to present logical arguments, engage emotions, and establish credibility rather than dwelling on how a debate theory or particular argument might best appeal to a certain kind of judge.

What are the rules for new arguments in rebuttal speeches?

A more perennial question for the Debate Committee concerns frustrations associated with understanding and dealing with “new arguments” in rebuttal speeches and what constitutes “rebuttal abuse.” We empathize with the consternation expressed in questions like this:

Are there rules, protocols, or guidelines for when arguments can be introduced during a round? For example, can a new argument or new evidence be presented in the rebuttals?

The short answer to this question is that we do not have a rule for debaters about when they can present arguments or evidence in a debate round, but we do offer some guidance for judges to use when they observe a new argument, idea, or source of support being interjected late in a round.

The longer answer about the problem of new arguments introduced in rebuttal speeches requires an understanding of three principles that ground our debate event rules and should govern the preparation and conduct of debaters.

As a starting point for explanation of the reasoning for limiting rebuttal speeches to the material under ongoing argument in the round, let’s look at this excerpt from our NCFCA Comprehensive Guide to Value Debate, adapted for the purpose of clear cross-application to Policy Debate:

Because we agree with this principle, our judges are told that the goal of NCFCA debate is “clear and respectful argumentation,” and our Debate Judge Training Video has this to say about the purpose of the speeches in the round:

The bottom line is that deliberately waiting until the rebuttal speeches to slip in new arguments, answer dropped arguments, or introduce new pieces of evidence for the sake of late impact is disrespectful, unfair, and unsportsmanlike.

For NCFCA students, disregarding sportsmanship should be a serious red flag because as Christians, we should never resort to disrespect or injustice. Winning simply because an opponent couldn’t respond is a hollow victory. Someone who wins with a new argument in a rebuttal may win a debate round but will not win in life. “Do not be deceived: God is not mocked, for whatever one sows, that will he also reap. For the one who sows to his own flesh will from the flesh reap corruption, but the one who sows to the Spirit will from the Spirit reap eternal life” (Galatians 6:7-8 NIV).

So, practically speaking, if this is such a problem, why doesn’t NCFCA just have clear and explicit rules against rebuttal abuse?

The answer is that we believe the best judge of whether an argument is appropriate or abusive in a round is the judge of the round. We humbly accept that attempts to precisely define what constitutes rebuttal abuse and craft a rule against it would be futile. We further acknowledge that attempts after a round to adjudicate whether rebuttal abuse has taken place would require us to take sides amongst competing perspectives and prove just as futile as any preemptive attempt to eradicate the problem. We are determined to think the best of our competitors and encourage them to do the same for one another. Many instances of new arguments result more from inexperience or poor organization than from an intent to ambush, and these should be handled with grace. Therefore, when it comes to rebuttal abuse, we must trust that judges will know it when they see it and handle it fairly.

We also encourage competitors to graciously hold one another accountable. In a rebuttal, it is acceptable to respectfully remind a judge that new arguments should no longer be introduced in the round. And, rebuttal speakers who feel there are unaddressed arguments left on the flow can point out that bringing up a new refutational argument would now be inappropriate. However, speakers should exercise great caution in claiming that a new argument has been introduced or an argument has been dropped. There is a difference between a new argument and one that simply doesn’t connect well. There is also a difference between a dropped argument and one that has simply not been addressed to the satisfaction of the team making the argument. It is disrespectful and unsportsmanlike to accuse an opponent of dropping arguments or abusing a rebuttal when the issue may simply be a breakdown in understanding between the teams.

What are the rules about using scripture for support in a debate round?

We don’t have a rule against using the Bible in debate rounds. However, it is very important for competitors to think carefully about using God’s Word in support of a debate argument.

The first consideration must be the nature of debate as an academic exercise intended to prepare competitors for real-world situations. Lincoln-Douglas mimics discussing values in the public square, Team Policy imitates arguing before a legislative body, and Moot Court simulates oral arguments before the Supreme Court. None of these imagined audiences can be presumed to be Christian, and NCFCA’s Judge Philosophy intentionally encourages inviting people from all backgrounds and walks of life to be the actual audience. While NCFCA unapologetically affirms that the Bible is absolutely the ultimate standard of truth, we do not hold the illusion that the rest of the world or our judges agree with this assessment. People in the public square and in positions of governmental authority do not automatically accept the Bible as a standard of truth. This does not mean that Christians should never quote the Bible as support for their arguments in the public square. Many general audiences are willing to accept the Bible as a collection of wise sayings and precedents from the past, but they don’t necessarily attach the same authority to it as we do. If we want to communicate truth with integrity and grace, we must always hold ourselves to principles that are grounded in Scripture, but we must also take our audience into account. Academic debate does not ask Christians to set their faith aside but rather to let it inform their communication with those who do not share the same core beliefs.

The second crucial consideration is honoring fellow competitors in a debate round. Many debaters understandably feel attacked when an opponent quotes the Bible to support an argument. When Christian debaters quote the Bible in a Christian league, it can make opponents feel like they are being accused of arguing against God Himself. NCFCA takes great care to write debate resolutions that allow for plenty of morally defensible arguments on both sides, and an NCFCA resolution should never force competitors to take a position against the Bible. Likewise, competitors should never attempt to force eachother to argue against God’s Word.

So, how should a competitor respond if an opponent seems to be using Scripture to win an argument? First, remember to be gracious and think the best of a brother or sister in Christ regarding motives. Often, novice competitors have not had a chance to think through the implications of wielding Scripture and do not intend to be unsportsmanlike. To address the issue, we encourage competitors to politely explain for both the judge and the opponent that the truth of the Bible and the standards of Christianity are not intended to be up for debate in the round. Instead, it is the resolution that is up for debate. It may also be helpful to remind both parties about the academic nature of the event and explain that by design, there is nothing inherently more Christian or more biblical about either side of the resolution. Christians can disagree on plenty of issues without violating their faith or conscience.

In summary, all three questions addressed above serve as valuable food for thought as we work together on our mission of training ambassadors for Christ to communicate truth with integrity and grace. We encourage our competitors to watch our judge training videos to see the guidance we give judges and to read about competition principles in our debate curriculum. Above all, we encourage our students–in this and all things–to “treat people the same way you want them to treat you.” (Matthew 7:12 ESV).

3 comments on “Go and compete well!”