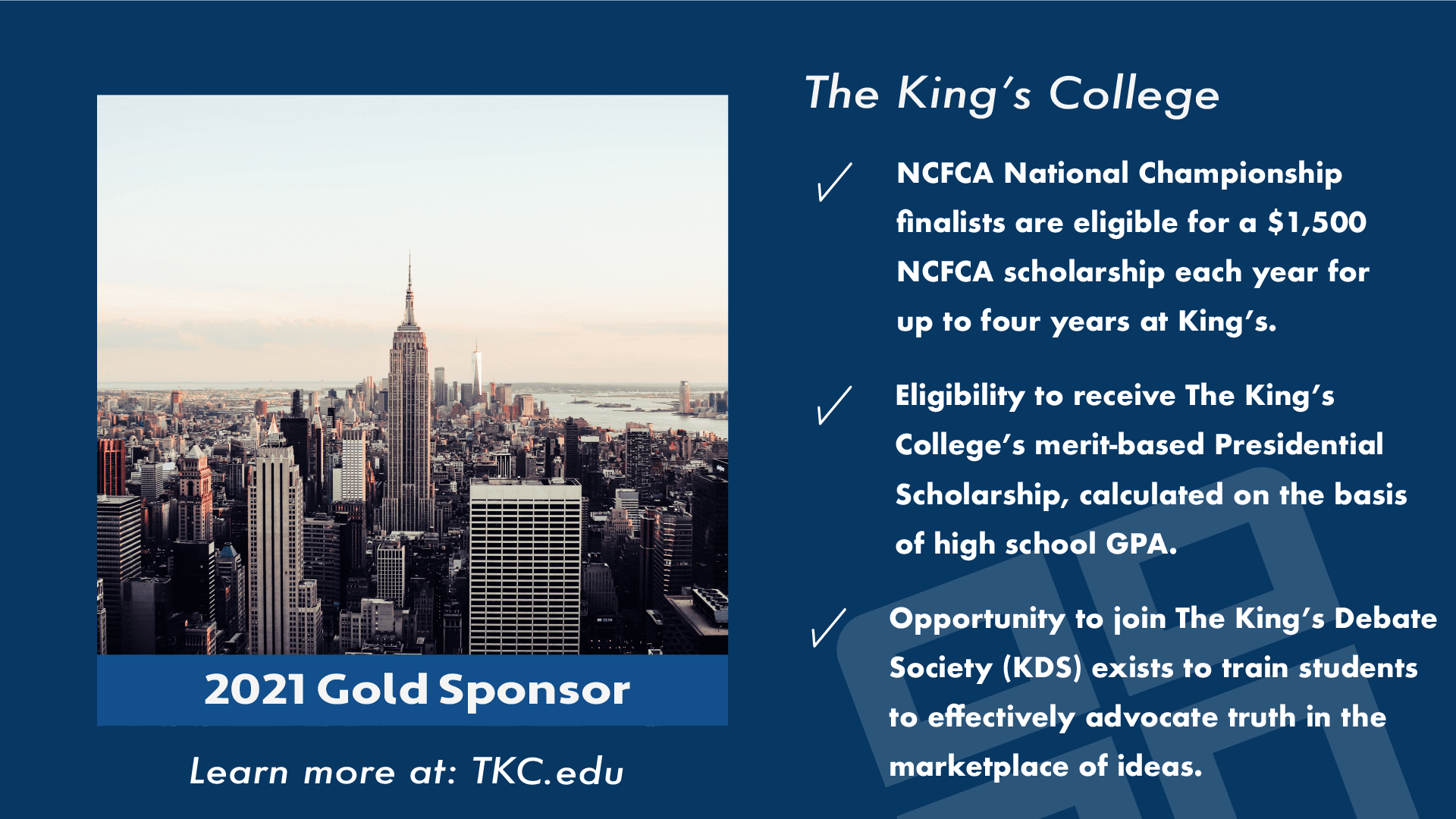 Mar 01, 2021
by Natalia Rosa
Director of Marketing at NCFCA

Many thanks to TKC and NCFCA alumna, Rebecca Au-Mullaney, for her contribution to this post.

At The King’s College, students gain an understanding of history’s enduring questions by studying a core curriculum of Politics, Philosophy, and Economics with a Christian framework. What is true? How should we live together and govern ourselves? How can we manage our resources to advance human flourishing? Learn more about TKC's Core Curriculum here.

Students and faculty have the freedom to seek the truth together.

As a Christian college, we focus on helping students develop the habits and practices that point them towards Jesus Christ, within the context of Christian community—both in and outside of King’s. We encourage students to belong to a local church and form upbuilding relationships within their House, with student development staff, and with faculty. Because we want students to embrace Christianity for themselves, rather than mandating participation we invite them to join in a rhythm of Scripture readings, prayer, Sabbath habits, and service to the City. The King’s College has an open enrollment policy and does not require students to profess Christianity to enroll. Full-time staff and faculty are confessing Christians who sign a statement of faith.

Our location in New York City prepares students for the world they participate in during and after college.

You get challenged and tested, you grow faster because of it. Students commute, dress in business casual, learn to cook for themselves without a meal plan.

The City helps students encounter new ideas alongside people who don’t look or think or act the same as they do, who come from everywhere and are up to everything. From visits to museums, Broadway, and the Stock Exchange, to internships at the United Nations, NBC, Goldman Sachs, and charity:water, if it’s happening, it’s happening in New York City.

What opportunities does TKC extend to NCFCA students?

NCFCA students are eligible to receive The King’s College’s merit-based Presidential Scholarship, calculated on the basis of high school GPA. The average NCFCA student receives $80,000 or more in total aid from King’s across four years through this scholarship.

The Presidential Scholarship is based on your academic performance. For freshmen, transfers, and international students, the scholarship is calculated on your GPA. Transfer students with over 24 credits are only evaluated on their college GPA. These awards will be calculated officially once a student is admitted. Students are required to remain in academic “Good Standing” in order to maintain their President’s Scholarship (see catalog for required GPA by class year). All students are automatically considered for this scholarship. No separate application is required.

NCFCA National Championship finalists (in any speech or debate category) are eligible for a $1,500 NCFCA scholarship each year for up to four years at King’s.

To secure this scholarship, applicants who have already been finalists in a previous National Championship must inform their admissions counselor by email before January 15 of the year they intend to enroll. This ensures that the scholarship is calculated in their official award letters. If students go on to qualify to the final round at Nationals the summer before they begin at King’s, they must email their admissions counselor no later than July 15 for the scholarship to be applied to their Fall balance.

The King’s Debate Society (KDS) exists to train students to effectively advocate truth in the marketplace of ideas. We speak, study, and debate in order to confront the ideas that threaten the world, and promote those ideas that uphold the principles of the Gospel and the value of human dignity. King’s debaters train and compete in the Worlds Parliamentary debate format, a form of British Parliamentary debate that’s most internationally-recognized.

So far we have traveled to eleven different countries for competitions, so get your passports now!

We have earned a wide array of speaking awards and tournament titles, with King’s students advancing to elimination rounds at six national championships and becoming finalists or top speakers at eight of the last nine Northeastern Season Openers. KDS teams have bested students from Yale, Harvard, Princeton, and Cornell, to name a few, and new debaters from King’s regularly become top novice speakers and finalists at the Novice National Championship.

Elle Rogers is a homeschooled student who graduated with a B.A. Philosophy in 2019 from The King's College. She is now pursuing a J.D. at University of Chicago Law.

Elle Rogers (PHL ’19) gave the valedictory address at The King's College 2019 Commencement ceremony, describing how the world seems like “pandemonium,” full of the vicious and the power-hungry, but the King’s education offers hope. Rogers explained,

“We were taught about a way of life bound up in questioning and examining and searching for the good together. We listened to a message, whispered first in an upper room: ‘The light has come into the world.’ It became shouts on the street, announcing a new political order in which the good was always present.”

Samuel Tran is an NCFCA alumnus from California. He received his B.A. Politics, Philosophy, and Economics in 2014 from The King's College. He works as a director at the Grace and Mercy Foundation in New York City.

Samuel Tran is grateful for his King’s education and how it prepared the former Student Body President for post-grad work.

"At King’s, we intentionally studied the intersection of disciplines, and as a result, I learned how to ask questions that reveal the proverbial forest beyond the trees,” Tran said. “Now, those same questions are no longer theoretical. What does human flourishing look like in practice? How do we help move the needle on the most pressing social issues of our day? Where do the broader trends lead? Those are but a few of the questions I think about every day.”