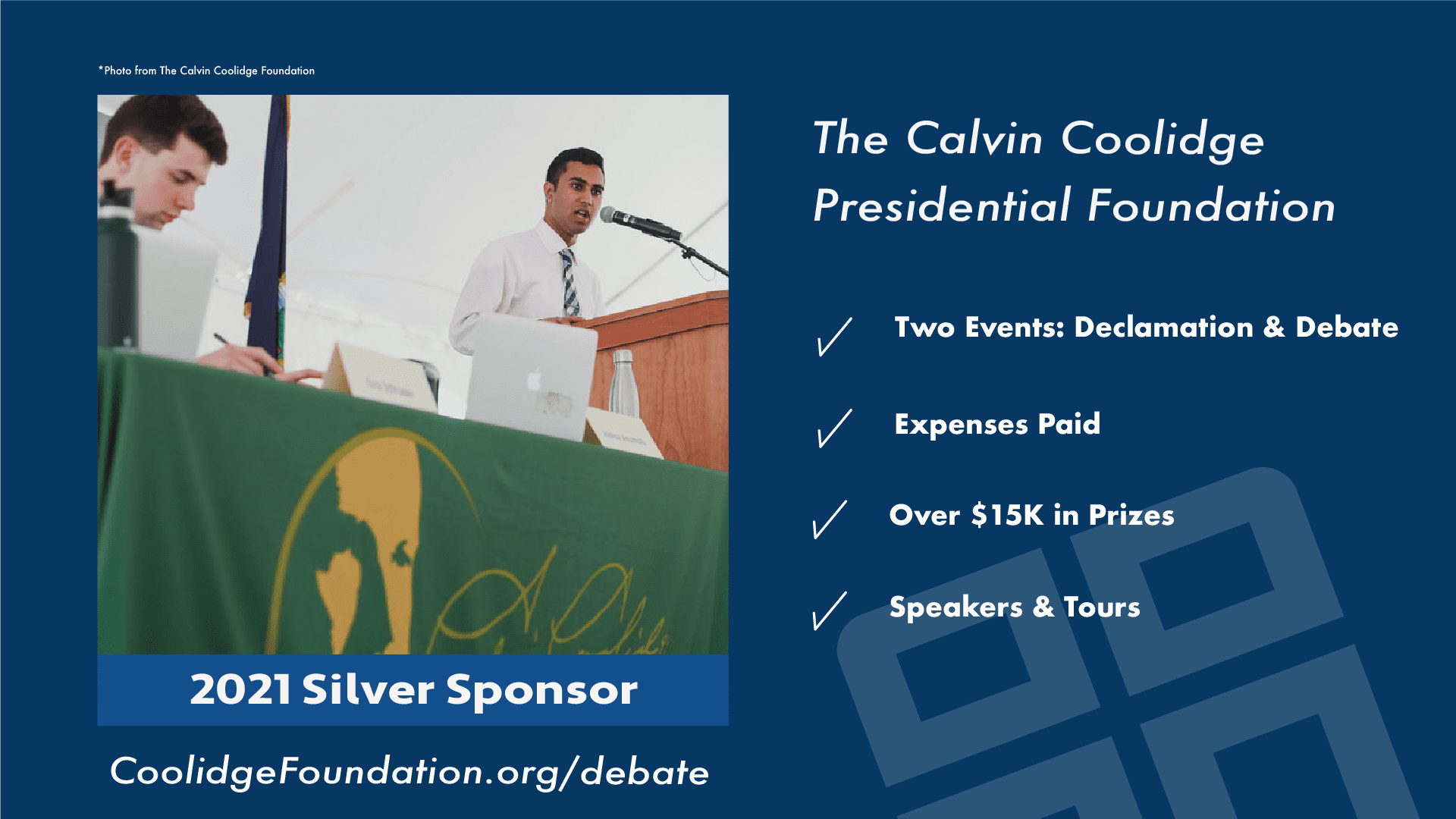 Many thanks to Debate Program Director, Jared Rhoads, for his contribution to this post.

What is The Calvin Coolidge Foundation?

The Calvin Coolidge Presidential Foundation is the official foundation dedicated to preserving the legacy and promoting the values of America’s 30th president, Calvin Coolidge, who served in office from August 1923 to March 1929. These values include civility, bipartisanship, and restraint in government (including wise budgeting). It maintains offices at the president’s birthplace in Plymouth Notch, Vermont, and in Washington, D.C.

What opportunities does The Calvin Coolidge Foundation extend to NCFCA students?

The Coolidge Cup is a speech and debate tournament for high schoolers that takes place each year July 2-4 at the Coolidge historic site in Plymouth, Vermont. More than $15,000 in scholarship prizes will be awarded to the top performers.

Speech students: To earn an invitation in declamation, enter the Coolidge Cup Qualifier Competition for Declamation, an online competition that is open now through April 30, 2021. Select one Coolidge speech from the official packet of speeches, record a video of yourself declaiming it, and then submit your entry. The top entry from each state will win a prize, and the top 8 will be invited to the Coolidge Cup.

Debate students: To earn an invitation in debate, check the list of Coolidge Cup Qualifying Tournaments for Debate for details on tournaments and bids. Earn an invitation by competing in one of the tournaments listed (including select NCFCA tournaments). Included in the list of qualifying tournaments is an online Coolidge Qualifier in partnership with Southern Methodist University, which is online and open to all students.
For questions about the Coolidge Cup, visit their website or write to Coolidge Foundation Debate Director Jared Rhoads at (jrhoads@coolidgefoundation.org)

“This past summer, I participated in the 2020 Coolidge Cup, debating the merit of lockdowns in the face of the COVID-19 pandemic. The Coolidge Cup gave me the unique experience of meeting top-tier debaters from multiple leagues and conversing about the most pressing issues in America. I thoroughly enjoyed my experience and would highly recommend that NCFCA competitors check it out!”

Learn more about the 2021 Coolidge Cup